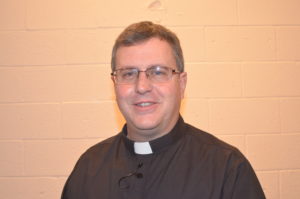 Tim Freed was born and raised in West Chester, Pennsylvania, a suburb of Philadelphia. He and his family were active members of Calvary Lutheran Church. Upon graduation from high school, he enlisted in the US Army and served as an Aeroscout/Observer on OH-58 Scout Helicopters for 1/7 Cavalry, 1st Cavalry Division. He is a veteran of Operations Desert Shield and Desert Storm.

Tim graduated from Widner University in Chester, PA with a B.S. in Business Management. He worked for a manufacturers’ representative and distributor of industrial instrumentation that measured level and flow for process industries (petroleum, chemical, pharmaceutical, power generation, municipal, and food industries).

In his twenties, he was one of the leaders of the high school youth at Calvary Lutheran, a church council member and a member of the Chancel Choir. All of this was formative in his future call to parish ministry. After a period of discernment, (church-speak that means prayerful consideration and agonizing over possibly doing the wrong thing) he entered the Lutheran Theological Seminary in Philadelphia.

He met his wife, Holly, during his second year at Seminary and they married two years later. He received his Master of Divinity Degree and was called to Nativity Lutheran in 2004, the same year their son Jason was born. Their daughter Hannah arrived in 2007. Holly Freed is a Senior Accountant for The Bonadio Group (CPAs, Consultants & More) in their East Aurora office.

Pastor Tim believes strongly in meaningful and engaging worship. What is this?

Christian education is something that Pastor believes should be for all ages and meaningful to the participants as well. The Sunday school teachers and educational material at Nativity, as well as the opportunities offered for learning, reflect this belief.

Tim believes strongly in the need for pastors to be active spiritual caregivers and Nativity is commited to the visitation of hospitalized and shut-in members and their relatives and friends when called upon to do so. Pastor Jack Printzenhoff, Nativity’s Minister of Pastoral Care, primarily cares for the shut-ins and Tim and Jack work well together for the care of all.